Headed home. Today will be a long day in the van.

Hope you have the tunes ready or your pillows.

I wish we could have actually gone to Texas.
This was a trip to learn about the crisis at our border.
The crisis still exists and now has gotten worse for those seeking asylum. 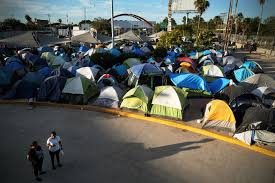 Now if people come seeking asylum, they cannot stay in the United States while awaiting their court date.  So those who are not detained, must remain in Mexico.  Tent cities have popped up along the border.

Imagine you have walked for weeks, maybe months to escape from a situation so awful you would leave home, take very little, make an extremely dangerous trip with no certain outcome.

If we walked from Southminster to McAllen – it would take, according to Google Maps, 331 hours – which is just about 2 weeks of walking non-stop.  That same distance to the south of McAllen puts you in Palenque – where Southminster has done work with Living Waters for the World – Southern Mexico.  Most of the migrants are coming from even further south.  So a month of walking or paying people who may or may not kill you along the way to transport you.

Now they are living in a tent city.  In a pandemic.  Close quarters, no way to socially distance, no real access to running water/showers/bathrooms.  A vulnerable group made even more so by this disease.  Now we are also entering hurricane season.  Big storms hit and tents are blown away.  Now what?  How do we help the least of these?